This article was crowdfunded by our readers

Young Petra Cortright (1986, Santa Barbara, California) is part of a new generation of artists who grew up with computers, digital technology, and the Internet. She began presenting her work on the web at the age of 15 and has been one of the most well-known and widely exhibited artists. She had a retrospective when was less than 30-year-old. With still 33, the Californian has emerged from the art world’s post-internet sensationalism of the mid-2000s.

Lately, Cortright has also gained momentum with her exhibitions in “physical” galleries working beyond JPEG files and websites, to incorporate elements of her online experience into the conceptual part of her art practice.

Petra, the Monet of the 21st Century

Impressionism, the revolutionary 19th century movement in French painting striving to capture the transient aspects of visual reality, especially light and color. Claude Monet was the most consistent and prolific practitioner of the movement’s philosophy for expressing perceptions before nature, especially he used to paint a plein air (outdoors) landscapes using multiple, thick, visible brushstrokes. Among his best-known works, are his French water lilies surrounded by other exotic flowers.

Petra Cortright’s most recent works are digital paintings filled with flowers and water lilies that are instinctively reminiscent of Monet. Cortright’s multi-layered process, begins by sourcing imagery online, as a type of digital source. The technique is to create what she calls “a mother file,” which she then manipulates adding multiple layers. According to the artists, each layer represents a painting permutation, making the combinations nearly infinite.

The final file is printed then onto various substrates, such as aluminum panels, sheets of linen and silk, or rag paper, which are layered to create the final painting, varying in opacity and translucency. As was the case with Impressionism, visible brushstrokes are a vital element of Cortright’s new work. The viewer can see the same brush strokes in the different versions and on the different substrates. As a painting made by the hand of a human being, all the Cortright’s computer produced physical pieces are unique, where elements of the digital process are very present.

From capturing the light on “plein air” to the digital landscape

Her current practice is increasingly aligned with Impressionist ideas, adapted for the 21st century idiosyncrasy. While Monet and his “male” counterparts reflected on the experience of seeing at the late 19th century in France, Cortright does just this in the present moment and reflecting on the digital landscape.

Rather than painting a plein air, as was the Impressionist way, Cortright works indoors and online. Whereas Monet spent his days among lush blooms and greenery, Cortright’s garden is the Internet, where she captures fleeting changes in color, the effects of moving interfaces, and the backlight of screens as it were a digital landscape.

Moreover, Cortright likes for her works to evidence this laborious process. That is why, alongside her paintings, she has started to create videos that came about as a direct result of wanting to reveal more about her working method, and now exist as standalone pieces.

Another technique of the masters of the past transferred to the digital world: the impasto. The technique is defined as paint that stands up from the surface it has been applied to, due to the quantity of paint used. Impasto is most often associated with Baroque painters such as Rembrandt or Velázquez, whilst the impasto of modern and contemporary painters —although coming from the baroque— gives an emphasis on gesture and the physical presence of paint itself. The latter would be more adjusted to the technique used by Cortright. 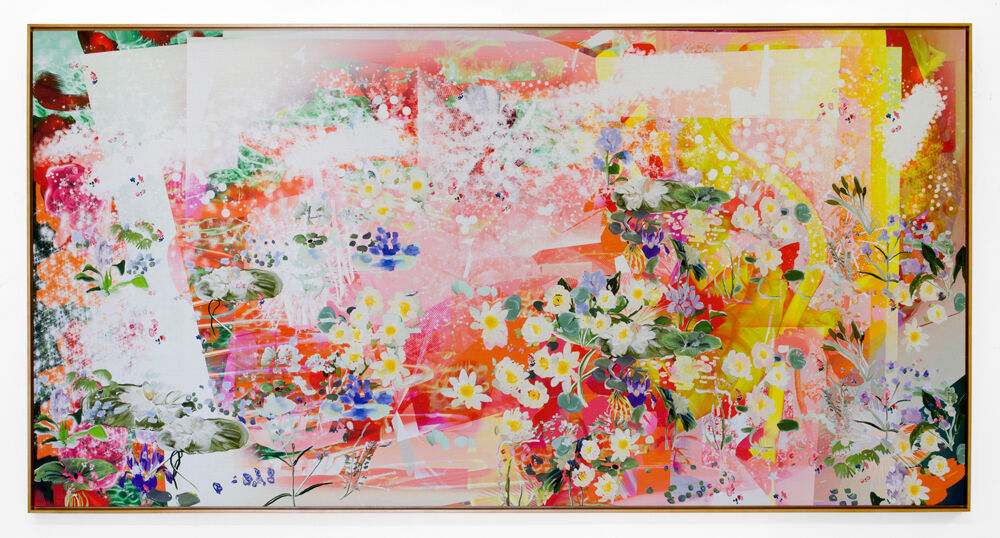 Her paintings on aluminum, silk, linen, polyester or paper are created in Photoshop. Layer over layer is added using this particular and popular raster graphics editor. These multiple layers are what will make the digital impasto. The digital files are infinitely modifiable, but at a “given moment” they become finite, she decides when and why are finish and then she prints them out through industrial printing processes, translating them into a two-dimensional object.

Among the breadth of artists working with digital media, looking to expose its problematic nature —the existential crisis that ensues from hours spent surfing—, Cortright sets herself apart by introducing a different way of seeing the online environment, which is focused on feeling, gesture, and bright beauty.

The Semiotics of the Rose

In some of her works, Cortright evokes the semiotics of the rose, a motif filled with symbolism throughout art history, and equally resonant today in digital social nets culture among teenage girls.

Cortright shows how her materials and techniques consider visual clichés and how they unconsciously structure the ways of seeing according to gender. The finished painting inevitably reproduces the sense of the feminine archetype that Cortright started with, in her beginings. Her purpose isn’t to undermine that archetype but rather to reconfigure it, creating something neutral.

Post-Internet art is an art that deals both tangentially and directly with the network of networks, the world wide web, or the great digital web. Thus, the main part of Petra Cortright’s practice is to create and distribute images.

Using a range of mediums to explore performative online cultures and the aesthetics of online consumption, she started with a rough home-video aesthetic. Cortright often recorded herself performing simple acts and gestures, such as kicking a football, tugging at a tree branch, or dancing around a bedroom. She added effects, filters, computer graphics, highlight video memes and behaviors common to sites like Youtube.

In Vvebcam (2007) for example, she recorded herself on a webcam passively scrolling through different effects while a repetitive trance beat played in the background. Despite the video reaching an international audience, Youtube removed it in 2011, due, the company said, to its excessive use of “offensive” language. Cortright tagged the film with explicitly sexual language, a component which the artist considers part of the work.

In other previous works, Cortright has incorporated prevalent signs and symbols that refer to gender and beauty. Cortright maintains that this proclivity is simply a result of her interest in art archetypes (such as landscapes as we already saw), but they nonetheless evolve into a motif that speaks of the unconscious gender coding that is embedded in contemporary visual culture on the web. For example the animated virtual strippers in Vicky Deep in Spring Valley (2012).

Petra’s website is similarly playful and nostalgic, displaying an array of antiquated emoji that are engaged in activities from fencing to vomiting. Cortright explains that the website reflects the motifs and “iconography” that she grew up with as a kid and teen crawling around on the net, as well as her affinity for collecting “stupid or stupid-looking things.”

She describes the website as a representation of how she “came to be. Cortright doesn’t just cite the vintage web on her websites, she also recreates the fragmented, clumsy experience of navigating the internet during its infancy.

Feminism and Gender Bias in the Art World

Cortright’s artmaking process is shaped by archetypal gender behaviours from the beginning. She paints with a rapid, action-style of painting, conventionally associated with masculinity. Yet she admits that she has scaled her work down physically to a size that she feels is manageable for her. It’s not only in her process that she considers the influence of gender. Cortright reflects on her position as a female artist in a male-dominated field.

She suggests that this gender bias may have been what led her to Pinterest, which became the source of the images she uses in her new paintings. Pinterest is heavily driven towards women and she wanted to use more of that imagery and energy, trying to make something that a lot of people really make fun of, from things that are reductive to something that is additive.

While gender is a complex issue, Cortright reiterates that the purpose of her art is more sensory than cerebral. The magic in her work is in making us see things we’ve seen a million times before as if we’re seeing them for the first time.

She has always preferred to have the core of the work to be focused on simpler but deeper things, like beauty. Things that are somehow inherent to the entire human race, yet remain a very slippery thing to define.

Petra Cortright, a member of the Simco’s Club

We can’t say goodbye without talking about the art market, and this is because Petra Cortright has recently sold one of her paintings for $65,000 at auction. Her success is due in large part to the support of the highly criticized but influential businessman dedicated to launching the careers of young artists, Stefan Simchowitz. In fact, Simchowitz is responsible for launching Oscar Murillo, one of the four new holders of the prestigious Tate award in 2019.